We only consider a very constrained set of remotes here:

If you use a different host or different remote names, you should still be able to translate these examples to your setting.

Along the way, we note how these setups relate to the usethis package, i.e. how usethis can help you get into a favorable setup or how a favorable setup unlocks the full power of usethis. Many of these operations – including characterizing your GitHub remotes – require that you have configured a GitHub personal access token. See section 9.3 for more details on why and how to do that. If you don’t use usethis, feel free to ignore these asides.

As a starting point, consider a local Git repo that is not yet connected to GitHub. 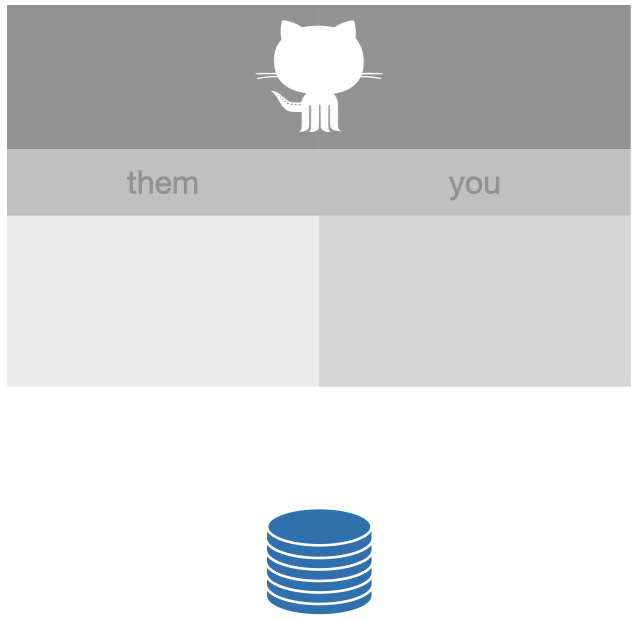 This is not very exciting, but sets the stage for what’s to come. We introduce the icon we use for a Git repo, which looks like a stack of coins or a barrel. This one is blue, which indicates you have write permission.

usethis describes this setup as “no_github”.

A common next step is to associate a local repo with a copy on GitHub, owned by you. 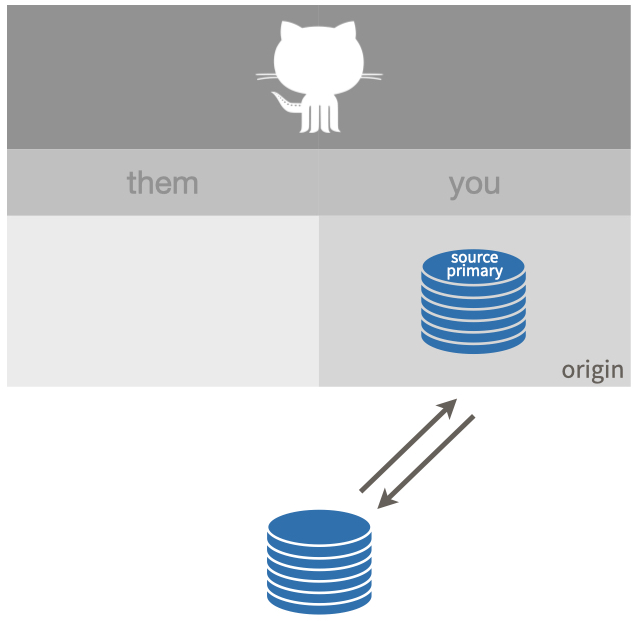 A remote named origin is configured and you have permission to push to (and pull from) origin. (That’s why origin is colored blue and there are solid arrows going both directions.) The origin remote on GitHub is what we’ll call a source repo, meaning it is not a fork (i.e. copy) of anything else on GitHub. In this case, origin is also what we’ll call your primary repo, meaning it is the primary remote you interact with on GitHub (for this project).

How to achieve if the local repo exists first:

How to achieve if the remote repo exists first:

usethis describes this setup as “ours”.

Here is a variation on “ours” that is equivalent in practice. 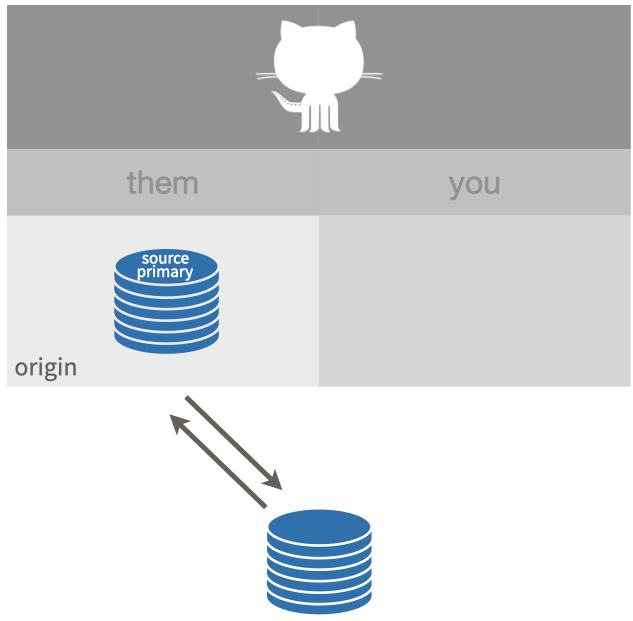 A remote named origin is configured and you can push to (and pull from) origin. As above, origin is a source repo, meaning it is not a fork (or copy) of anything else on GitHub. The origin remote is, however, not owned by you. Instead it’s owned by another GitHub user or organisation. origin is also your primary repo in this setup.

How to achieve? The procedure is the same as for the previous “ours” setup. But remember to specify usethis::use_github(organisation = "ORGNAME") if you want to create a new repo under an organisation, instead of your personal account.

usethis describes this setup as “ours”.

This is a setup that many people get themselves into, when it’s not actually what they need. It’s not broken per se, but it’s limiting. 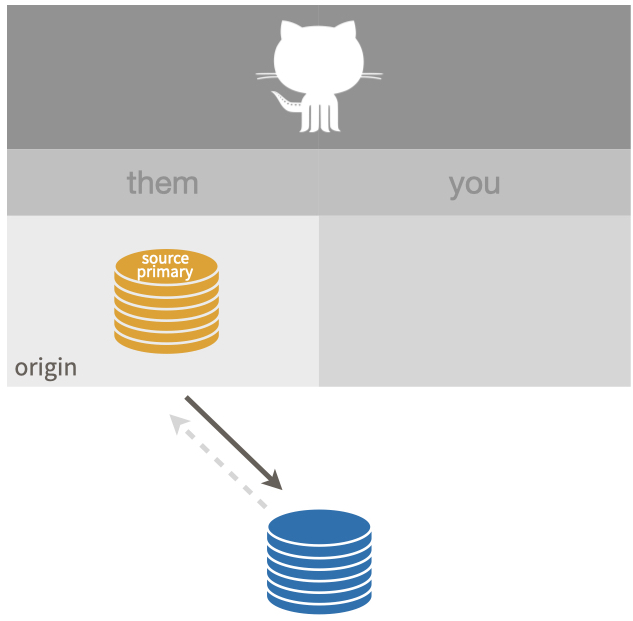 You cannot push to origin, which is both the source repo and your primary repo. (This is indicated by the orange color of origin and the greyed out, dashed “push” arrow.) origin is read-only for you.

If you are taking a repo for a quick test drive, this configuration is fine. But there is no way to get changes back into the source repo, since you cannot push to it and you haven’t created a fork, which is necessary for a pull request.

usethis describes this setup as “theirs”.

What if you do want to make a pull request? This means you should have done fork-and-clone instead of clone. If you’ve made no changes or they’re easy to save somewhere temporarily, just start over with a fork-and-clone workflow (fully explained in 31) and re-introduce your changes. It is also possible to preserve your work in a local branch, fork the source repo, re-configure your remotes, re-sync up with the source repo, and get back on track. But this is much easier to goof up. And remember to fork and clone (not just clone) in the future!

This is an ideal setup if you want to make a pull request and generally follow the development of a source repo owned by someone else. 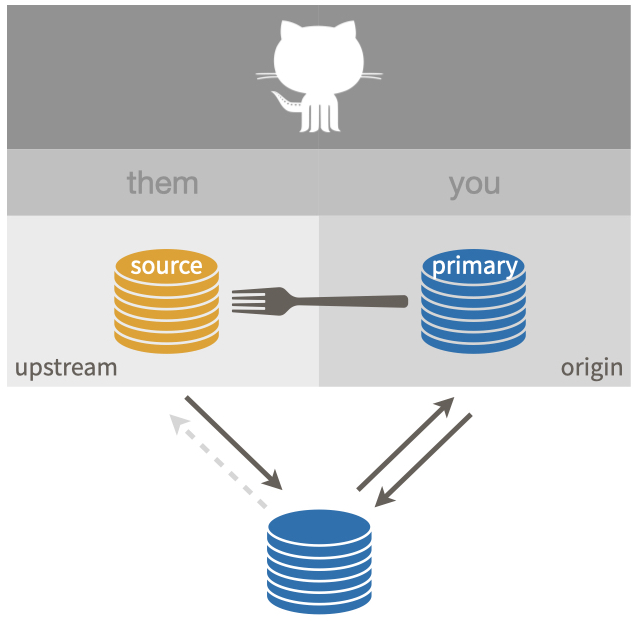 usethis describes this setup as “fork”.

This is a less common variation on the fork setup. 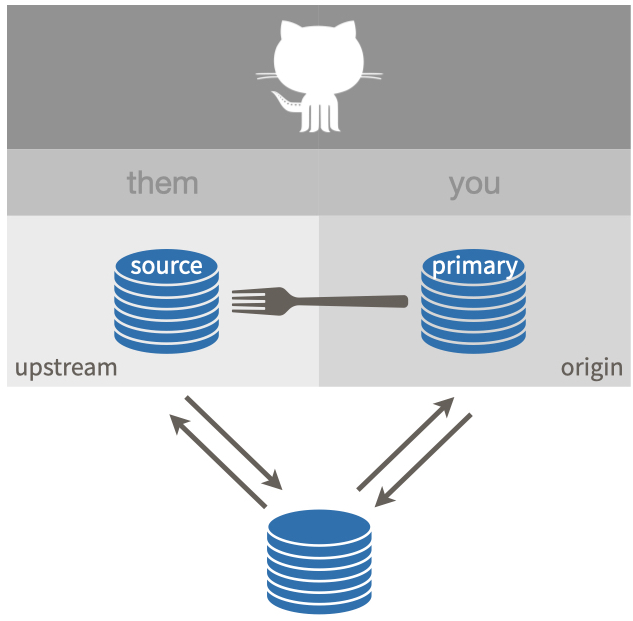 In this case, you have permission to push to the source repo, but you elect to create a personal fork anyway. Certain projects favor this approach and it offers maximum development flexibility for advanced users. However, most users are better served by the simpler “ours” setup in this case.

usethis describes this setup as “fork”.

Here is one last fork setup that’s sub-optimal, but it can be salvaged. 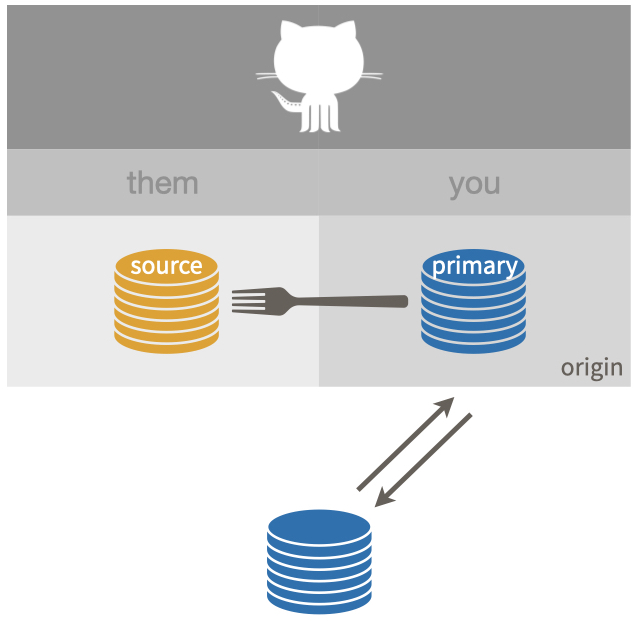 If you only plan to make one pull request, this setup is fine. When the exchange is done, delete your local repo and your fork and move on with your life. You can always re-fork in the future. But if your pull request stays open for a while or if you plan to make repeated contributions, you’ll need to pull ongoing developments in the source repo into your local copy.

You can convert this into the ideal fork setup like so:

Next time you do fork-and-clone, consider using usethis::create_from_github(fork = TRUE) instead, which completes all of this setup in one go.

usethis describes this setup as “fork_upstream_is_not_origin_parent”.